The Air Traffic Management (ATM) system is a complex system composed of a large number of heterogeneous components, such as airports, aircraft, navigation systems, flight management systems (FMS), traffic controllers, and weather (see Kim et al. (2009)[1]). Therefore, its performance is affected by numerous factors. Within the trajectory-based-operations concept of SESAR and NextGen, aircraft trajectories are key to study ATM operations, which are subject to many uncertainties. Sources of uncertainty for aircraft trajectories include wind and severe weather, navigational errors, aircraft performance inaccuracies, or errors in the FMS, among others. The analysis of the impact of uncertainties in aircraft trajectories and its propagation through the flight segments is of great interest, since it might help to understand how sensitive the system is to the lack of precise data and measurement errors, and, therefore, aid in the design of a more robust ATM system, with improved safety levels.

The methods used to study trajectory uncertainty and uncertainty propagation can be classified into two main groups:

The GPC representation was introduced by Wiener (1938)[7] and it is based on the fact that any second-order process (i.e., a process with finite second-order moments) can be represented as a Fourier-type series, with time-dependent coefficients, and using orthogonal polynomials as GPC basis functions in terms of random variables. A general introduction to GPC can be found in Xiu and Karniadakis (2002)[8] and in Schoutens (2000)[9], whereas details in numerical computations are studied in Debusschere et al. (2004)[10].

Applications of GPC to aerospace problems

The method of polynomial chaos is used in the works of Prabhakar et al. (2010)[11] and Dutta and Bhattacharya (2010)[12] to study, respectively, uncertainty propagation and trajectory estimation, for hypersonic flight dynamics with uncertain initial data. Vazquez and Rivas (2013)[13] develop methods to study the impact of initial mass uncertainty on fuel consumption during the cruise flight phase. Other examples is Okamoto and Tsuchiya (2015)[14] which use it to solve the problem of optimal trajectory generation in the context of stochastic optimal control.

Traditionally, GPC requires formulating a set of nonlinear ordinary differential equations (based on the model of the system under study) for the time-dependent coefficients. This is known as intrusive polynomial chaos, and is the methodology applied in this work. However, it is worth mentioning that recently, a different approach (known as non-intrusive polynomial chaos) has emerged. This new approach does not directly solve these equations but instead computes the GPC coefficients from a number of simulations of the system under study, which can be treated as a black box. A comparison between the intrusive and non-intrusive approaches can be found in Xiong et al. (2014)[15] Recent applications include Jones et al. (2013) [16] which employ nonintrusive GPC for nonlinear propagation of orbits, and Li et al. (2014)[17] which use it for robust aircraft trajectory optimization.

Start from a differential equation

where either the initial condition [math]x_0[/math] or the parameter [math]\mu[/math] are random numbers, coming from a given probability distribution. Then [math]x(t)[/math] itself becomes random.

The main results is that if one chooses a family of polynomials which are orthogonal, the convergence of the series is exponential. The orthogonality property implies that, when taking expectation with respect to the random variable for two polynomials of the family [math]\phi_i[/math] and [math]\phi_j[/math], then [math]\mathrm{E}[\phi_i \phi_j]=\delta_{ij} \mathrm{E}[\phi_i^2][/math], where [math]E[\cdot] [/math] is the mathematical expectation and [math]\delta_{ij}[/math] is the Kronecker's delta function. For instance, for the uniform distribution (typically denoted as [math]\Delta[/math]), the adequate orthogonal polynomials are the Legendre polynomials [math]L_n(\Delta)[/math].

To apply the GPC method, one first write [math]x(t)[/math] in terms of the orthogonal polynomials.

where [math]P[/math] is the order of the approximation, which is to be taken sufficiently large. The coefficients [math]h_i(t)[/math] are to be found using the differential equation of [math]x(t)[/math]. The advantage of the GPC method is that a small or moderate value of [math]P[/math] is enough to get good results, thus resulting in a method that is not very intensive computationally.

Once the coefficients [math]h_i(t)[/math] are found, one can compute approximate values of the fuel mass mean and variance at all times, as follows. For the mean one has

and for the variance

This method was developed in Vazquez and Rivas (2013)[13] to study the evolution of the aircraft mass probability density function in cruise flight with uncertain initial mass.

Start, as in GPC, from a differential equation

where either the initial condition [math]x_0[/math] or the parameter [math]\mu[/math] are random numbers, coming from a known probability distribution. Then [math]x(t)[/math] itself becomes random.

Recall that, given a random variable [math]z[/math] with probability density function [math]f_z(z)[/math], if one defines another random variable[math]y[/math] using a transformation [math]g[/math] such that [math]y=g(z)[/math], then it is known that the probability density function [math]f_y(y)[/math] of [math]y[/math] is given by (see for instance Canavos (1984) [19]).

an expression which is valid only if the function [math]g(z)[/math] is invertible on the domain of [math]z[/math].

The idea of the method is to numerically approximate the transformation equation. For that, take [math]n[/math] consecutive points from the domain of [math]x_0[/math], denoted as [math]x_0^i, i=1,...,n[/math]. Solving the differential equation of [math]x(t)[/math] for each [math]i[/math] with initial condition [math]x_0^i[/math], one can compute the value of [math]x^i(t)[/math].

which is the sensitivity function of the solution [math]x(t)[/math] with respect to the initial condition [math]x_0[/math]. The process to obtain [math]\phi(t;x_0)[/math] can be found in any ordinary differential equations textbook, see for instance Hale (1969)[20].

From the distribution function, the mean and the typical deviation can be computed as

The required fuel load of an aircraft for a given cruise range with either uncertain average wind or uncertain initial mass is studied next to exemplify the GPC and PTM methods. The fuel mass probability density function is obtained using PTM, whereas Generalized Polynomial Chaos is used to study the mean and typical deviation of the required fuel mass. The dynamics of mass evolution in cruise flight is defined by a nonlinear equation, which can be solved analytically to obtain the fuel mass; this exact solution is used to assess the accuracy of the proposed methods.

The fuel load can be found from the evolution equation of aircraft mass. In cruise flight, the equations of flight mechanics for flight in a vertical plane (constant heading) are considered, under the following hypothesis: symmetric flight, flat Earth model, constant altitude, and constant velocity. Then, the equation of mass evolution is (taking into account the equation [math]T=D[/math], [math]T[/math] being the thrust)

where [math]m[/math] is the aircraft mass, [math]D[/math] the aerodynamic drag, and [math]c[/math] the specific fuel consumption, which is considered constant under the previously stated hypothesis. The cruise range [math]x_f[/math] is given.

Using these definitions, an autonomous equation for mass evolution is obtained:

To find the evolution of mass as a function of distance, consider the kinematic equation

where [math]x[/math] is the horizontal distance, and [math]w[/math] is the average wind speed, considered constant. Combining the mass equation and the kinematic equation to eliminate time, one reaches

It is realistic to consider that the initial mass [math]m_0[/math] is not a deterministic variable which is known a priori, but rather a random variable which is not known. Then, the solution of the mass equation is still valid but in a probabilistic sense, i.e., writing the solution as [math]m(t;m_0)[/math] to emphasize its dependence on the initial mass, this solution is a random process. If the distribution of [math]m_0[/math] is known, it is possible to apply the previously reviewed methods to study the distribution of the aircraft fuel mass consumption as well as its statistical properties (mean, variance, typical deviation).

Since the cruise range,[math]x_f[/math], is known, then the final value of the aircraft mass [math]m(x_f;m_0)[/math] is given by the mass equation particularized for [math]x=x_f[/math], and the fuel consumption during the cruise is

In this case, [math]w[/math] is random. In particular, an uniform distribution is assumed. Hence, the probability density function is

To emphasize the dependence of the mass [math]m(x)[/math] on the wind, the mass is written as [math]m(x;w)[/math], even though often it is just denoted as [math]m[/math] for the sake of simplicity.

In this particular application, the final aircraft mass [math]m_f[/math] is given (fixing [math]m_f[/math], instead of [math]m_0[/math], is consistent with having a fixed landing weight). Then, the mass equation is solved backwards with the boundary condition

and finally the resulting fuel mass consumed is found from 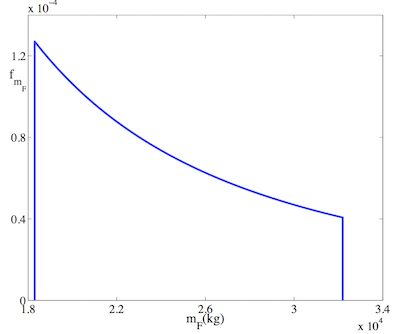 This project has received funding from the SESAR Joint Undertaking under the European Union’s Horizon 2020 research and innovation programme under grant agreement No 783287.